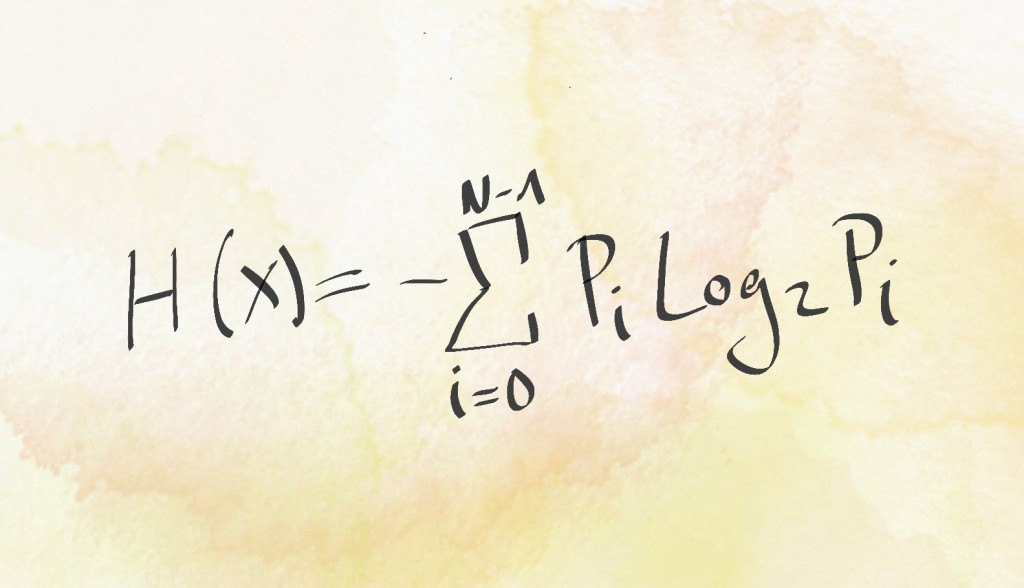 This is the first English blog post for my international colleagues! Since the original article about three variations of the VSM was a really poor machine translation, here my human version – still not perfect but hopefully better. And … sorry Google, Kudos for Alpha Go, but you have not cracked at least my sometimes special way of using the German language 😉

For Every Complex Problem…

… there is a solution that is simple, neat, and wrong.
— H. L. Mencken

Thanks to the feedback from the VSM group in Linkedin I will add three further versions of the VSM and reveal an exemplary application of the model. Again I will discuss shortly the pros and cons of the specific variations. Last but not least this post is not only a translation but also a slight extension of the first version – I try to keep it short.

A few months ago Ralf Westphal asked: „How would you describe a Minimal Viable System Model?“. His witty wording played with the context of a MVP and hit a nerve inside of me. Mainly it pinched me because my way of explaining and communicating the VSM was with regards to content very consistent and from a formal didactic point of view quite neat – but still too academic and abstract in its Gestalt.

10 Months ago (after publishing my book) I cared a lot about staying close to the Original work and my specific educational micro learning approach. After all I must have been a pain in the ass for some of my closest peeps, since I could not stop to talk about Homeostats, Variety Management, Recursion or the Art of Transduction.

After meeting Frank Düsterbeck and our inspiring exchange about topics like VSM, Change, Agility, Lean, Psychology, Sociology and other aspects we ‚automatically‘ developed ideas how to make the VSM more accessible. Frank wrote already in September an interesting post in Linkedin about his view of the model. The time one needs to understand the systems, relations, functions, principles and axioms is quite a hurdle. But since we are dealing with complexity it is useful to accept the fact that life is more than a directory tree – it is about the fundamental elements and relations of a viable system.

Here you find my six suggestions on how to tell the story of viability, without trivializing the basic ideas. I wrote a little comparison for the specific visualization in order to put the variation into an usage context. It is important to me to declare that none of the following variations are meant to replace the original model. These variations should be only „helpers“ to engage into a deeper exploration of the VSM.

Ex ante: I am still not satisfied. I have the bad feeling that each variation is lacking in terms of wholeness and that leads to a trivialization – a typical expert dilemma, like Maria Pruckner recently wrote. Naturally I like the original still the most. 😉 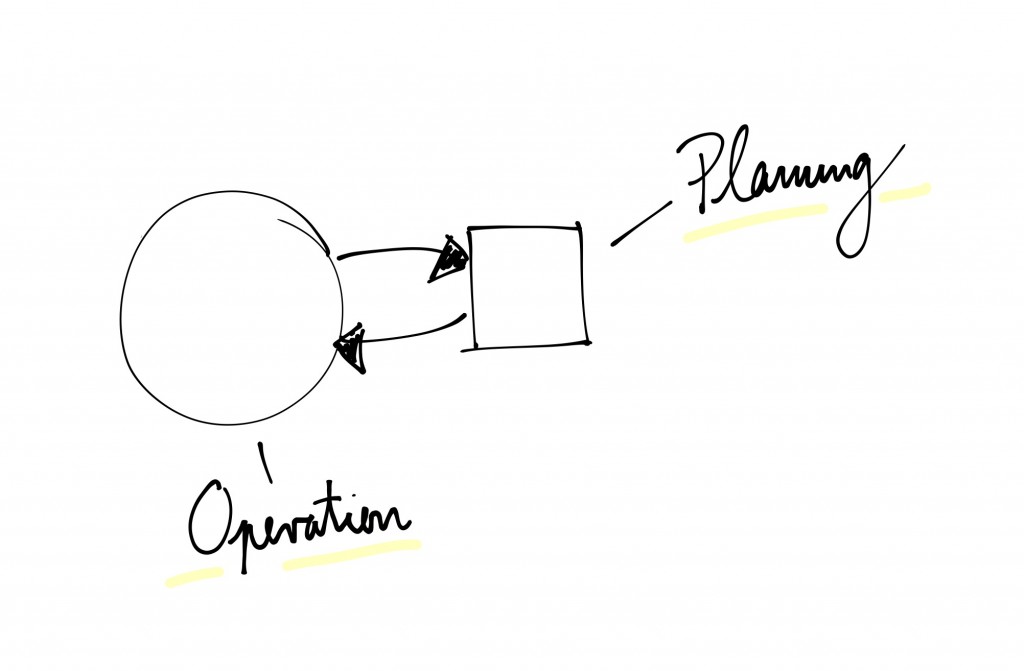 Advantages: Really really easy to unterstand – so easy that an 8 year old child could follow some ideas, e.g: At first you think about the problem and then you work on the solution. A simple Test-Operate-Test-Exit pattern (TOTE) could be applied and cyclical thinking could be introduced.

Disadavantages: Well, there are so many things missing that I would like to point out: This is really just a very very very short introduction to the basic concept of a viable system. So I would like to quote Henry Mintzberg from his book Strategy Safari:

There is something interesting and helpful in these military maxims. Yet there is something to be careful of as well: a language that is both obvious and obscure. Hence, in their own spirit, we offer our own maxims about maxims: 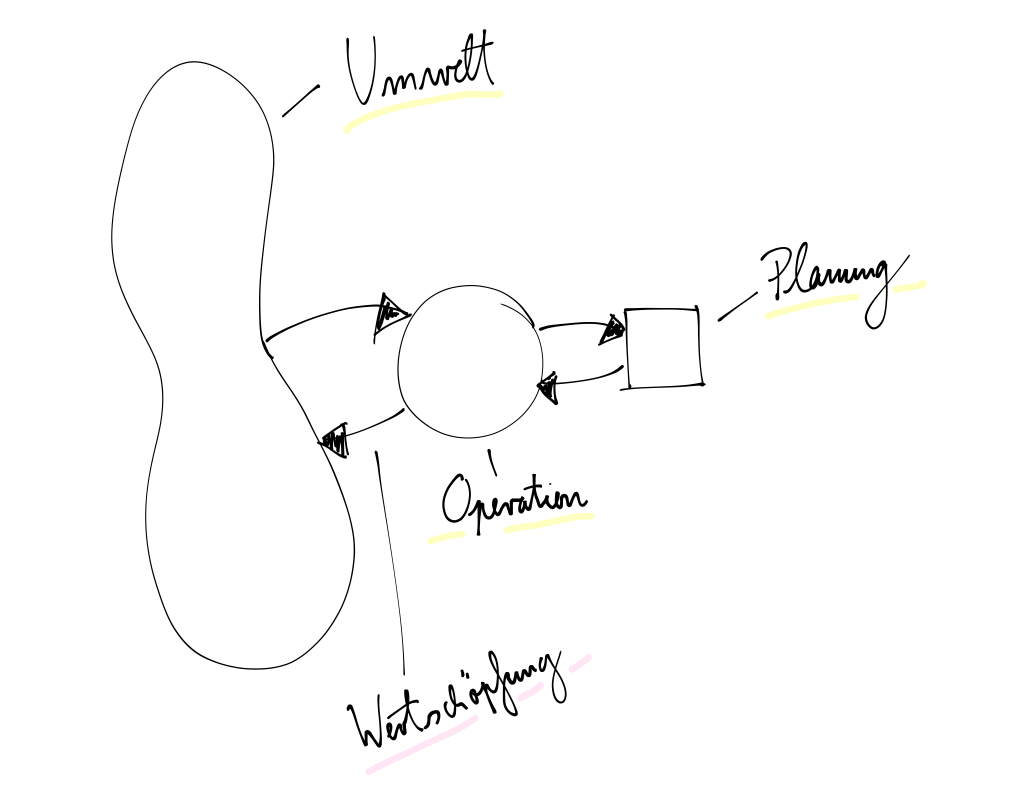 Advantages: At least something like the environment (Umwelt) enters the stage (a higher recursion level) – the ego mode comes to an end. First introduction of relations, networks and value creation (Wertschöpfung). Further more (on a slightly abstract level) it is possible to integrate in the planning box the functions of System 3, 3*, 4 and 5 (Tactical, Strategic, Normative). These aspects can be never found in an Org-Chart.

Disadavantages: The shown system-in-focus is still reduced to Operation and Planning. This could suggest a dualism of Operation and Management – it could be interpreted as an „against“ or „versa“ instead of acting together and being a whole. Something is missing. And still it has a technical touch.

2. The Trinity of Viability 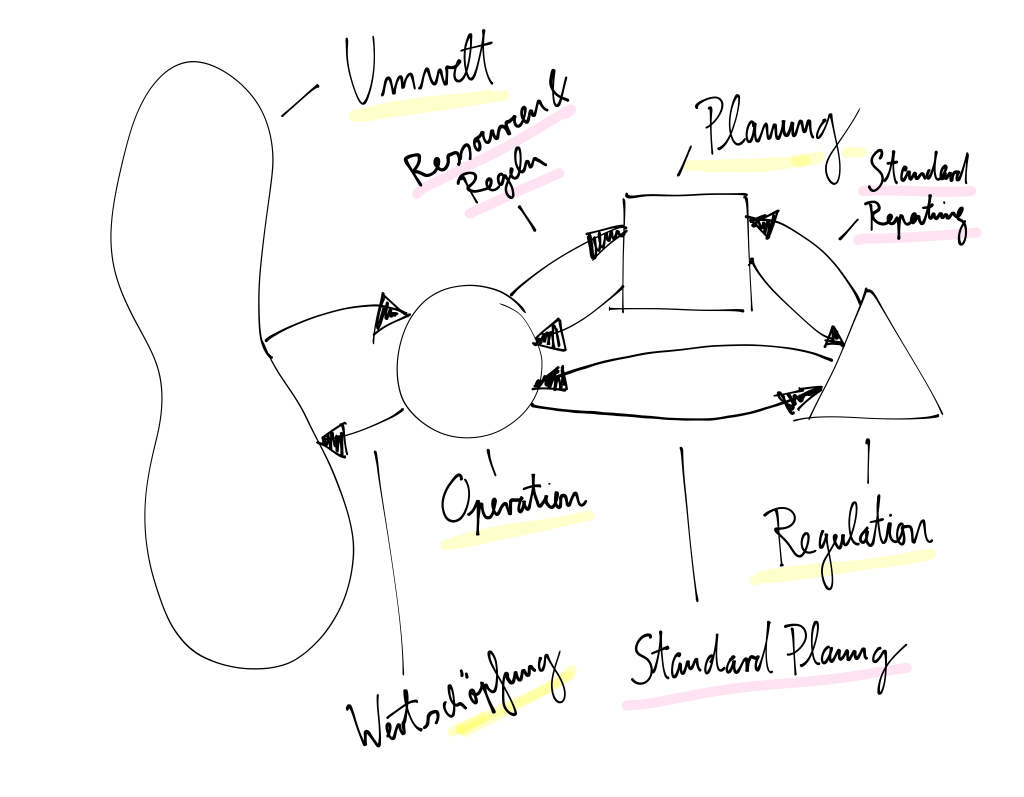 Advantages: The apparent dualism Operation vs. Planung (Planning/Management) is solved, since now a independent referee comes into play – the Regulation exposes no disciplinary power! Latest at this point a further set of questions arise: What the heck is happening on the channels? One can hardly escape the need to talk about variety. The ‚complexitiy‘ of visualization level more ‚complicated‘.

Disadvantages: The above mentioned Systems 3, 3*, 4 and 5 are still missing. What means planning in terms of the whole? Additionally the aspect of Transduction („Information Conversion“) is missing. The Transducers are the entry and exit points of the channels and act like interfaces between the systems. They are located at the tip of of each arrow act as „multi-slang-corporate-lingo“-carriers and, in contrast to a classical translator who could „distort the contained message“. Of course also this presentation is still quite techie.

3. The Flow of Becoming and Being 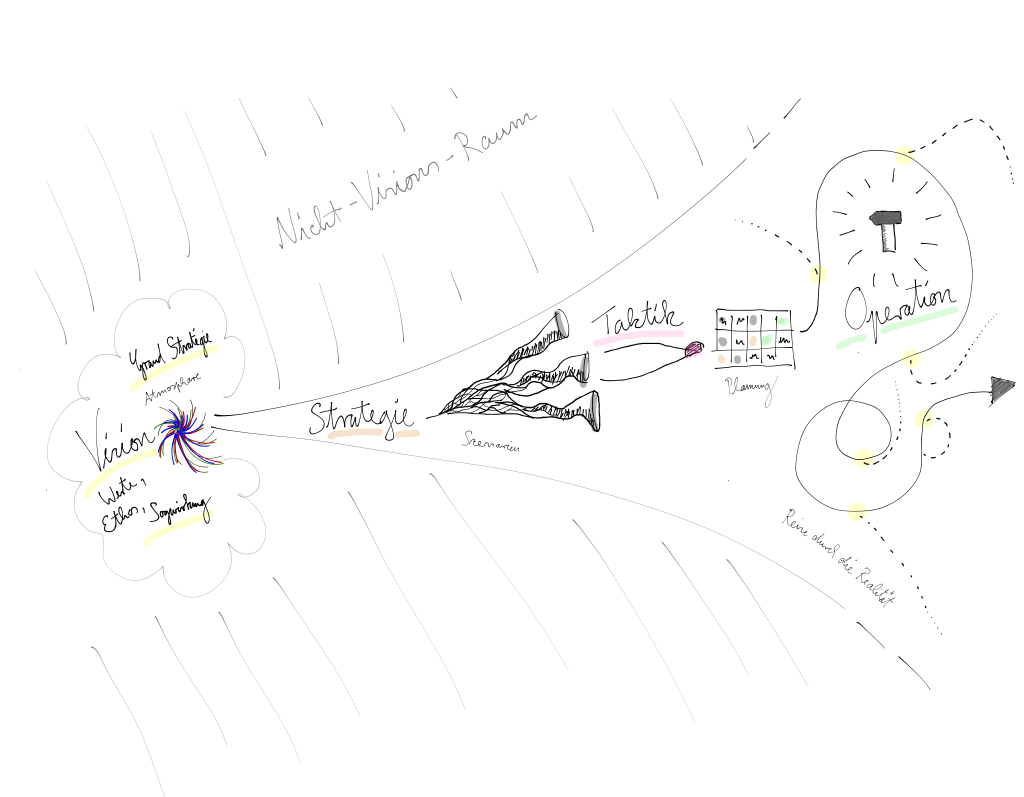 Advantages: The technical appeal is gone – the visualization delivers dynamics since it creates the illusion of a linear flow. Using the vision (System 5) as the starting point it creates the impression of contingency (step-by-step approach), which is a way that our cognitive apparatus always favors. Maybe the most „story-ish“ variation so far. The main aspect here: Explain the power of a vision and how it enables the „acting frame“ for the whole system. Only what is part of a vision could be actively reached (in terms of a goal-seeking and goal-achieving system). The widening space should remind one that variety in this flow usually grows from left to right, like in a typical scenario funnel. Therefore the right side shows the highest variety, because there „it happens“ during ones journey through reality. Or as I liked to put it in my days as a project manager in the digital marketing field, when I had to deal with technical issues: The truth can be found in the browser. So the message is: It is wonderful to plan and then to examine if the plan worked out 😉

I dared to add in this context an epistemological point: The „Nicht-Visions-Raum“ as kind of a „Dark Mental Space“. I wanted to map the aspects of the Unknown Unknowns.

Last but noch least it is possible to reflect the phenomenas of Parallelity and Abstraction – that one must juggle the normative, strategic, tactical and value creation aspects at the same time. So it could be more than a linear representation.

Disadvantages: The aspect of interrelations is lost. The idea of feedback seems to be gone. That’s the price for the linearity. Of course it would be possible to add the missing System 3* and 2 and some feedback loops, but then not so much is missing anymore compared to Stafford Beers Original and it will get more techie again. 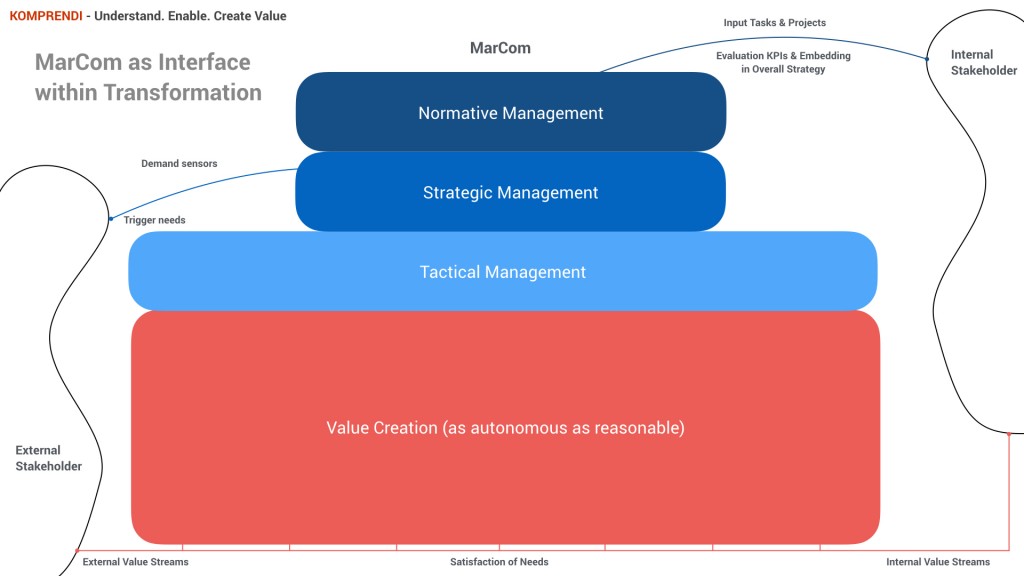 Remark: The following graphic is from an actual business presentation. The task was to understand the basic functions of a new department (a merger of Marketing and Communications to MarCom). In this context I dared to break a basic rule from the model: I treated the MarCom as a System 1, even though it operates as a System 4 for the whole. The following circumstances lead me to the conclusion that this feasible:

The company I am dealing with produces a non-tangible product which is (not only) but mainly driven by customer experience in every detail – from Marketing, Sales Down to the fulfillment of the product/service. And since the System 4 must be aware of itself (at least for simulations and scenarios) I thought it is Ok to use the model in this way.

Advantages: The client could understand how he is delivering value to the whole system as an interface to the internal and external sphere. A truly integrative perspective is offered. Due to the hierarchic presentation it is relatively easy perceived by people who are used to hierarchic organization models.

Disadvantages: Well, the move to treat the MarCom as a System 1 is still questionable. But for the moment I could live with it. And I take the hierarchic structure consciously into account. So I turn a bug into a feature 🙂 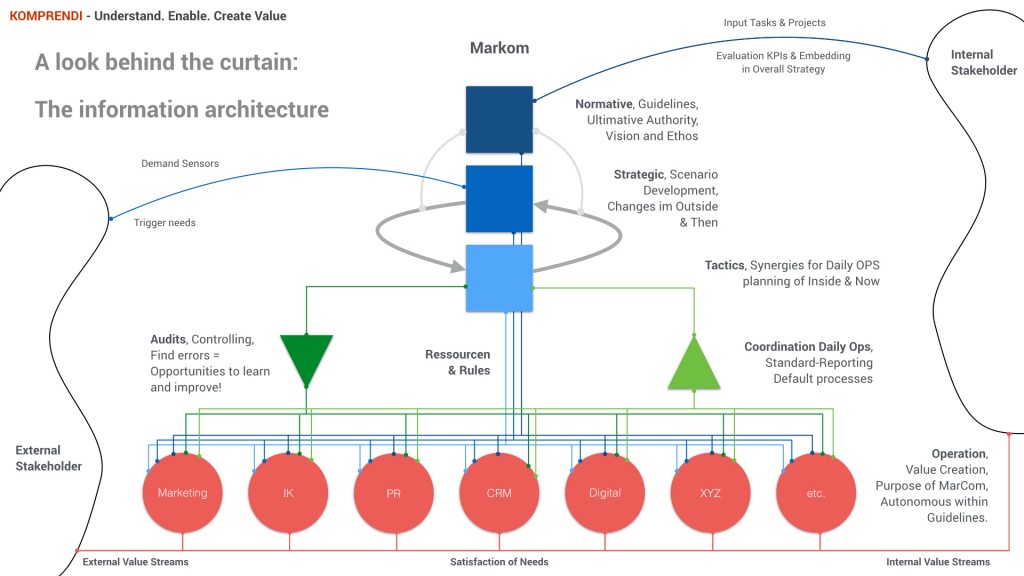 The last approach called „The trojan horse“ will be a continuation of the previous variation. So one could argue if it is really worth to be an own version. I think it’s worth the effort, because variation six exposes almost the full model. One little remark: I am totally aware that I treated the Marcom department as a VSM and that I am breaking the theory – or, and that is my actual idea, I extended the model, because I think it is worth a thought to treat a typical System 4 function like an own recursion level. This point needs definitely further discussions.

Advantages: This form looks almost like a classic Org-Chart, therefore I call this the Trojan Horse. The client could understand the network and deepen his insight regarding the relations of the systems. Furthermore he could follow the need to check his decision design and the corresponding „collaboration artifacts“ which produce or dampen variety. This allowed me to continue in my presentation about the context of „tools & data“.

Disadvantages: The Algedonic System is still missing, but that would have been a total overload in my presentation situation – please imagine that I had a time window of 8-10 minutes. And … of course there are relations to the other „neighbouring“ internal stakeholders – but the integration of this aspect would have been again too much for a first encounter.

An exemplary application of the VSM

The last part of the post deals with the question: How does the model helps the user to identify and evaluate the famous variety? Therefore I showed a terribly reduced default process within Marketing: the planning and execution of a campaign. So it is in this context my aim to understand the POSSIBILITIES of Variety Evaluation in order to design the channel capacity for the specific loop. 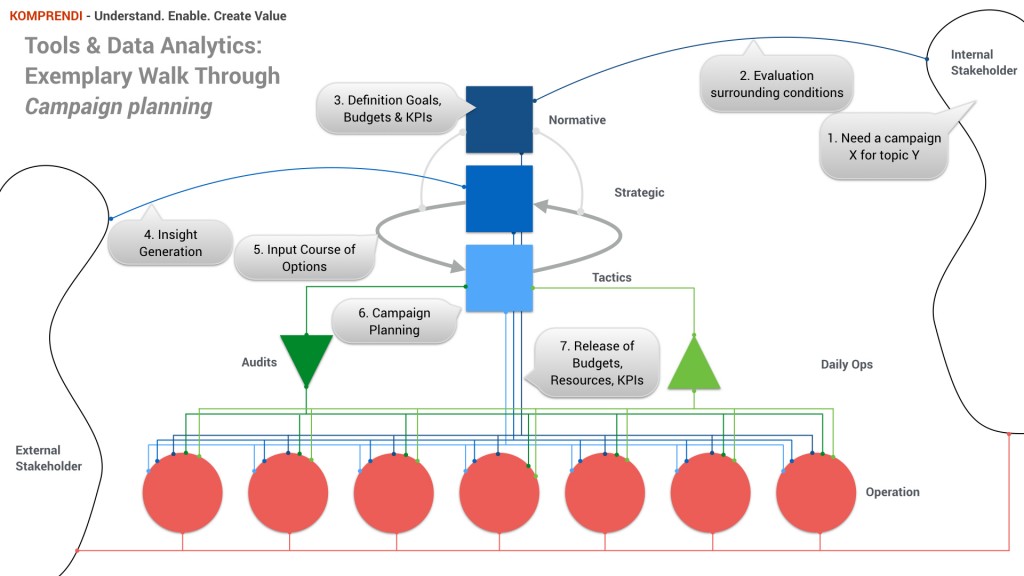 After the examination of the process I went on and talked about the different types of Collaboration Artifacts and to asked the question: Which artifact do you use in which context for what purpose? What could be done to activate the collective intelligence in the whole process? Basically everything about Variety Analysis and Design. 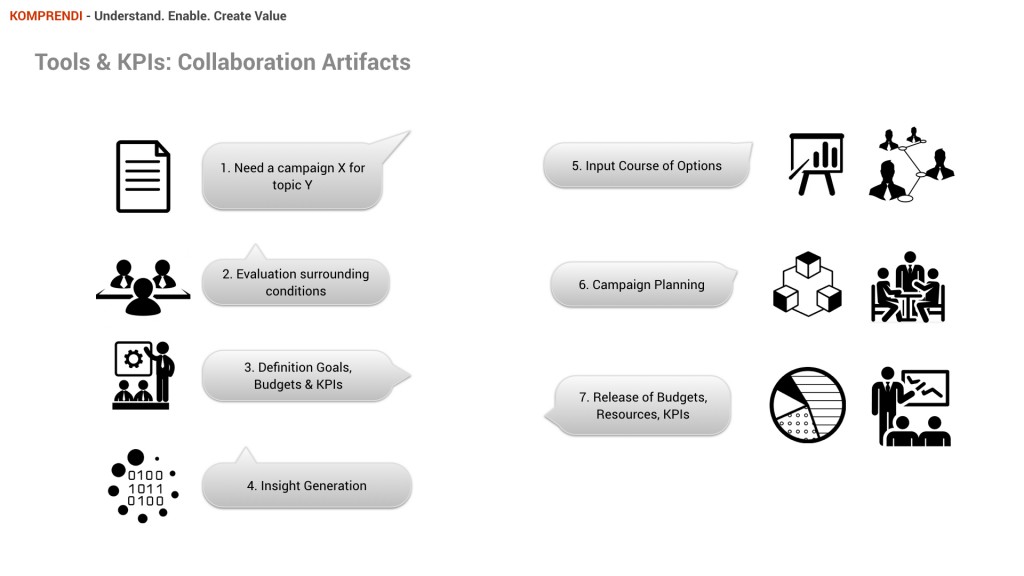 Of course there could be much more said about the application of the VSM – but this would demand an own book… Planning is already ahead!

So while I was writing this post I developed already two more ideas on how to condense the VSM, but I leave these ideas in my brain and let it think for a while, till I will update this page again. I am also curious to see the progress of Franks interpretation and his next iteration 🙂

Obviuosly I enjoy to invent different stories for an introduction into the VSM, so I am eager to produce a kids / play book for the VSM, before the Application Project will be engaged. Target groups for this book: Children and stressed C-level managers.

As always I’ll keep you in the loop! Looking forward to hear your thoughts and comments.